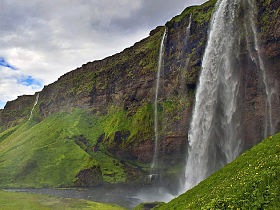 I have been saying for over 10 years that I would love to visit Iceland. I even thought about moving there at one point until I realized I’d have to learn Icelandic before they’d let me in. I can barely say Reykjavík. I’ve mooned over the country enough to know that I’d like to stay for a good while, though. It’s beautiful and mysterious and yes, it might be a little cold, but they have those hot springs and glaciers are at least pretty. Plus, the volcano stopped spewing! (Did you ever try to say Eyjafjallajökull?)

The only problem I might have would be the food–Iceland is borderline Scandinavian, and they’re not exactly known for their culinary delights. However, that would be something even I could overlook given the scenery. Someday, I hope!